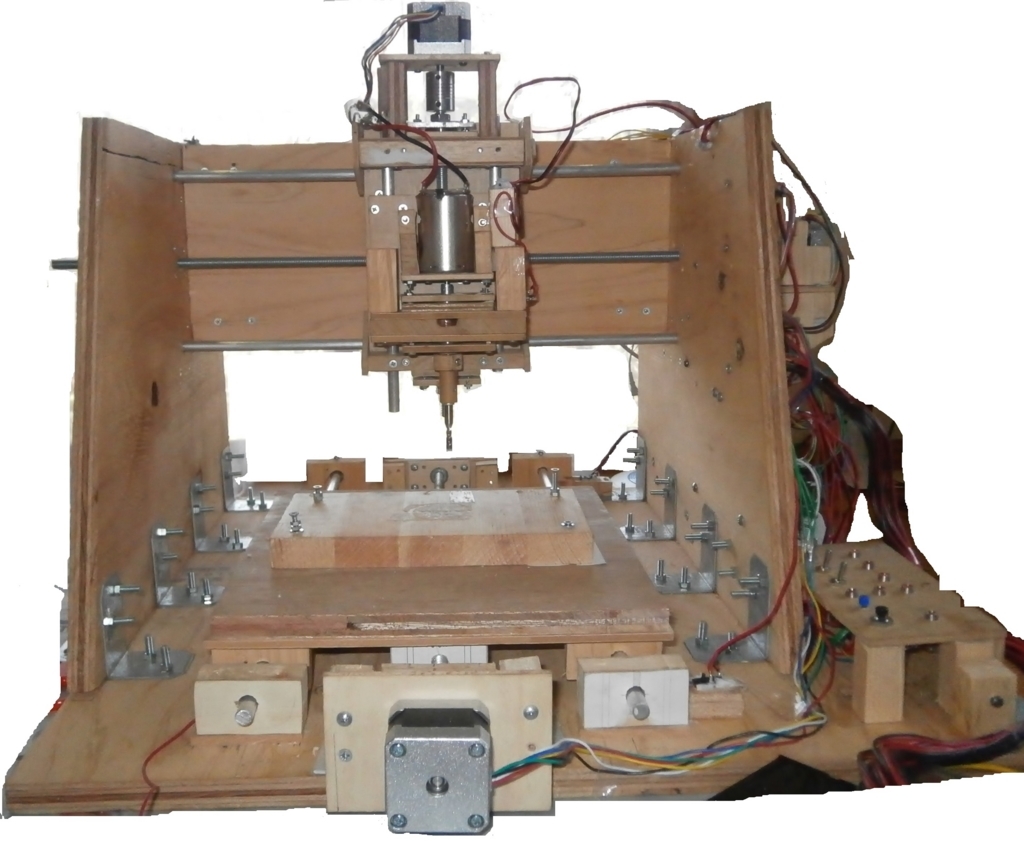 (The CNC machine I made)

The challenge of this study is “to make a wooden CNC from scratch”. Normally, CNCs are made of metal owing to its high rigidity, however this time, I made it with wood, which is cheaper and easier to process than metal.

The most serious issue of wood is its low rigidity, therefore, various kinds of problems happened, for example, vibration of the spindle that made machining very hard to work as expected.

By applying ingenuity based on the causality analysis and utilizing the characteristics of wood, I solved many other problems by smoothly connecting the hard and soft-wares. For example, in order to avoid risks like end mill breaking, I made a software program to monitor the rotation of the end mill. In hardware, a limiter was attached to the end of each moving part (three axes).

Even though the CNC I created is wooden, it achieved its performance to some extent by the skills coming from the feeling of sincerity and the search for precision to manufacturing. To think of this as a first step, I hope to combine such craftsmanship and state-of-the-art technology to create a new value.

A. The goal of this project

The goals of this project is to make a wooden CNC that goes around in likewise NC milling machine.

B. An overview of the CNC

CNC (Computer Numerical Control）is a milling machine which cuts and shapes designed material. An end mill, a kind of cutter, moves based on the data designed by CAD software working on PC. Normally, CNCs are made of a rigid substance like metal, however I challenged to create a wooden CNC in this study. Wood has unique features, one of which is that it is easier to process than metal, and is also moderate material that STUDENTS can get easily. However, various kinds of contraptions happened. I solved these problems by attaching new parts and utilizing the properties of wood. Further, some subsystems were attached to avoid the situation in which the end mill is broken in both software I coded and hard ware I made. 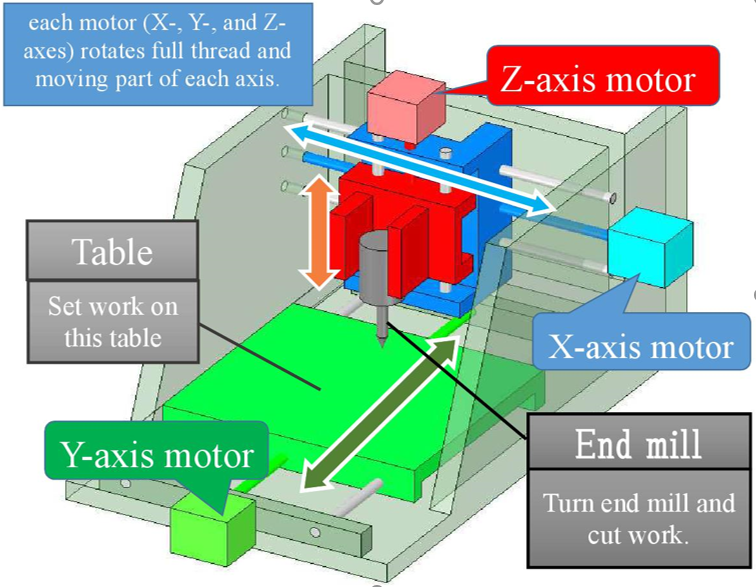 (Fig. 1 A typical structure of a CNC machine) 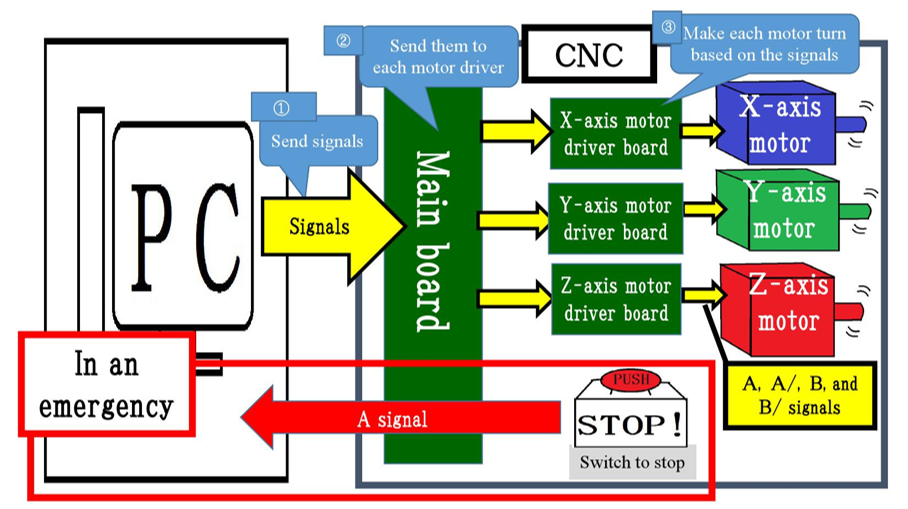 Almost all parts of this CNC are made of wood which is very cheap and easy to cut. They were made as follows: First, print out each plan of a part in actual size, second, attach it to a wood piece, which is then cut and drilled as designed by each plan. This CNC has wooden rails that support a moving part, (there are two rails and main shaft made of aluminium.)
The CNC has three main moving parts along X-, Y-, and Z- axes. Each moving part is supported by two rails and slides along the rails when a screw is turned by a stepper motor (Fig. 3). As a result, the CNC can make figures in three dimensions. 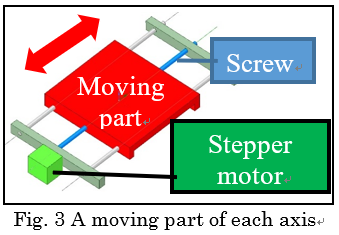 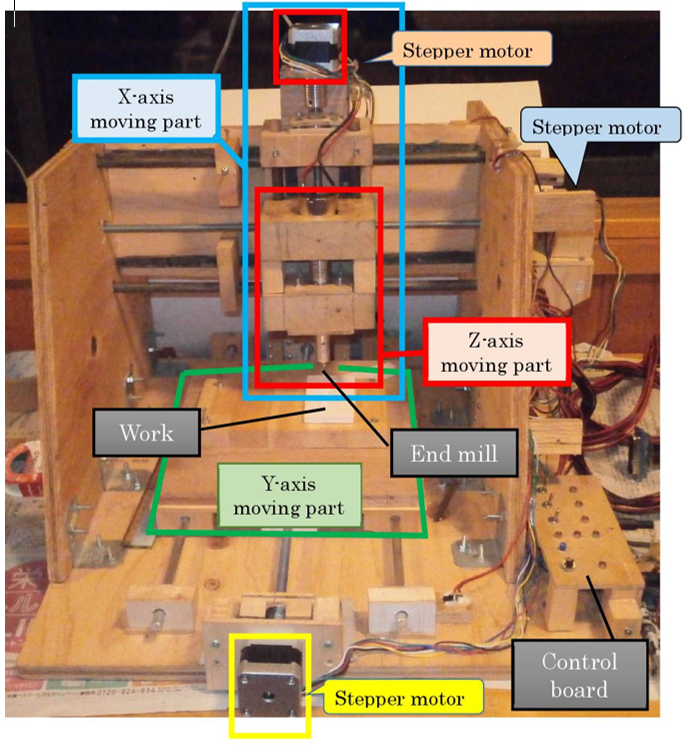 (Fig.4 Outward show of the CNC)

Fig. 4 is a photograph of the CNC captured from the front. As you can see, the most parts are made of wood. A blue rectangle moves horizontally, a big red one moves vertically, and a green one moves in depth. The control board can be observed at the lower right with many switches. We can check several situations of CNC (ex., how limiter works etc.) by LEDs on the top surface of the board. 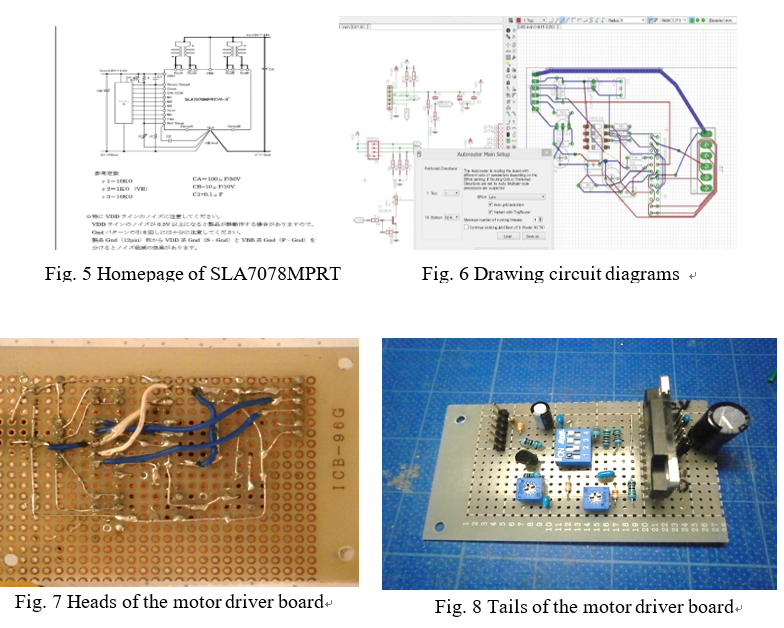 - Making control board
The control board is set at a remaining space of the CNC (The lower right of Fig. 4). It indicates the situation where the moving part of each axis is and the status of the power supply how much each part receives, and further a hardware switch for emergency is attached (see Fig. 11). 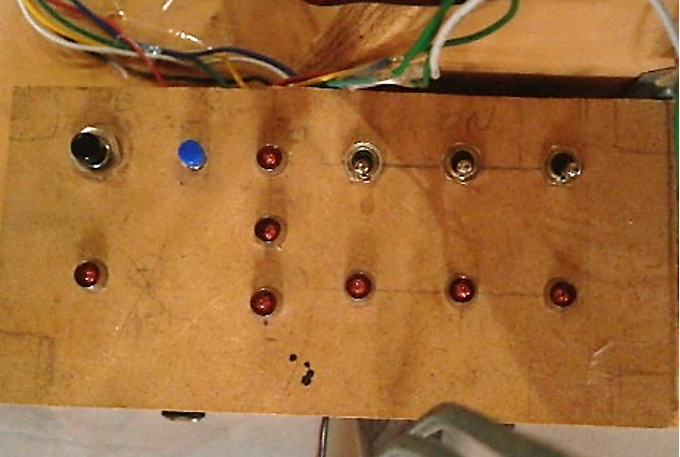 Software for sending G-code, CAM [1], and CAD [2] software downloaded from the Internet are used. It is difficult to send cutting data to CNC through cables expect for a parallel cable because MACH3 [3], a software to send cutting data to CNC, works only with a parallel cable. Therefore, by connecting the parallel port expansion board to the PCI slot of the PC and installing the driver (Fig. 12), it became possible to communication with the CNC (Fig. 13).

3-1) To machine more precisely and speedily

- Around the main shaft
By the vibration of the main shaft, it may take longer time to machine or might be impossible to machine according to the signal from the PC. Then, I improve as follows: First, a coupling is attached between the shaft of motor and main one, and made it absorb shaft shake（a coupling is drawn in yellow in Fig. 14）. 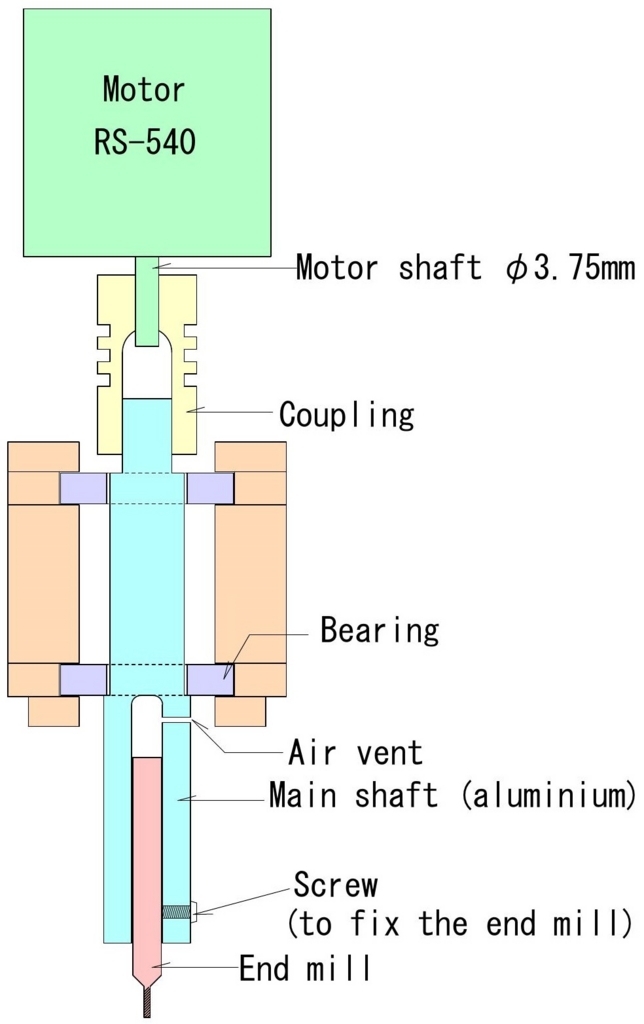 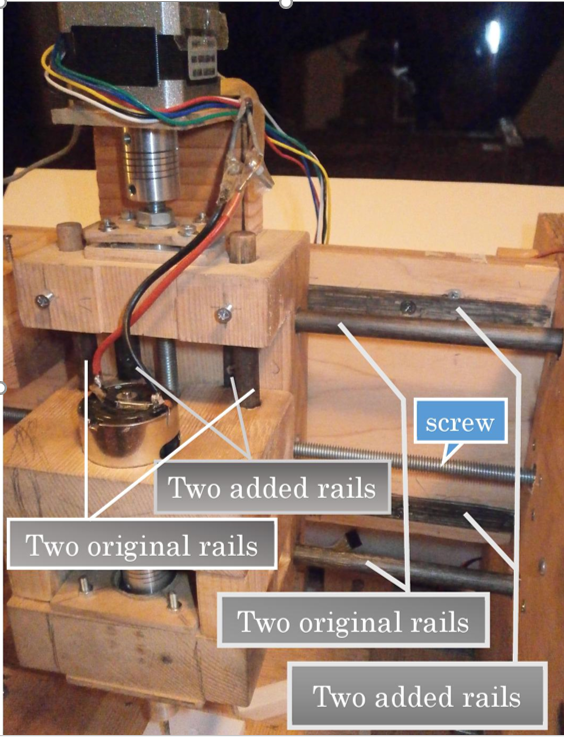 Rails of X- and Z-axes are made of wood. However, the friction between woods is larger than friction between wood and aluminum, (this combination is used in Y-axis). In order to slide the moveable parts of these two axes smoothly, it is necessary to select of rail material and lubricant. In this study, oak is used as rails and graphite of pencils is used as a lubricant. 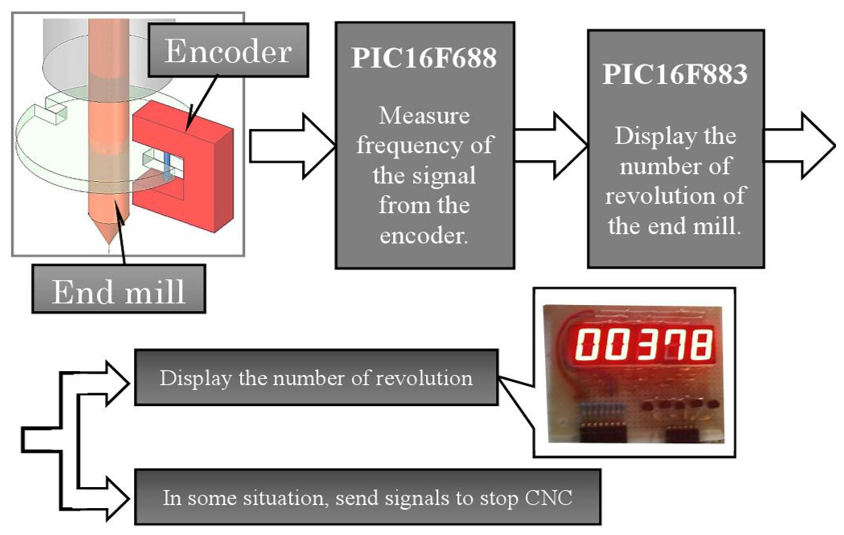 (Fig. 17 Diagram of the emergency system)

Fig. 17 shows how it works. Timer0 function of a PIC is used to measure the rotation speed of main shaft, and if the measured value was smaller than a defined one, a signal sent to PC. Two PICs, 16F688 and 16F883 programmed with C and assembler language for this device are used. This device can also display the rotation on the 7-segment LEDs. These two PICs are transmitting and receiving the number of revolution with the communication program as follows: (1) measuring the number of revolutions, (2) sending this information through serial line, and (3) displaying the rotation number.

(1) Measuring the spindle speed
First, an encoder that has two slits on the spindle is installed. Then, to count the pulses from the encoder, “Timer0” function of PIC is used. Pulses are counted by PIC in the following way in one second. When the TMR0 resister overflows, the T0IF bit becomes ”1” (Fig. 18). At that time, the variable OVERFLG is incremented. A data of rotation speed is stored in TMR0 resister and OVERFLG resister. Serial communication sends the value of the two resisters to PIC16F883. 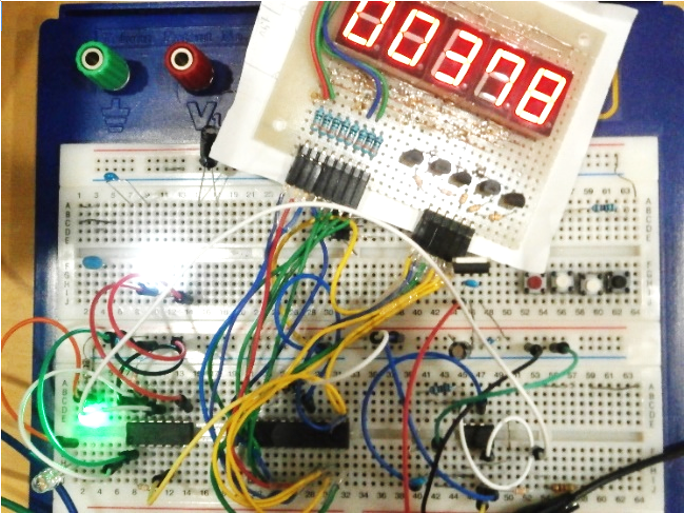 ・Attaching limiters and a cover
Each axis has two limiters at the end of movable region (three axes) (see Fig. 21). Shutter switches in disposable cameras were used for these limiters. Totally, six limiters are attached. Limiters can send a signal that shows each moving part comes to the end to PC and the control board. So, the situation of each limiters can be checked at the control panel or PC’s display.
Also, to be safe out of CNC even if it happens the end mill is broken by any chance during machining, the CNC is covered with an acrylic plate. 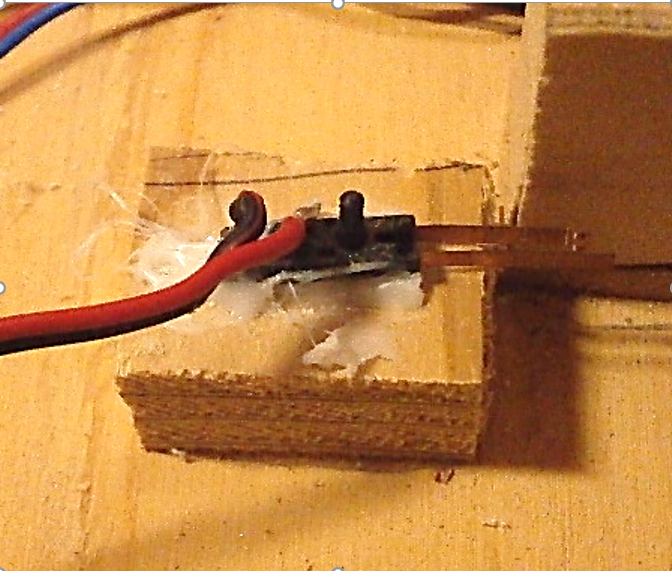 I made some solids like below by using the CNC.

This time, I made a plate carved a G clef. For the purpose, I lay it in layers and set the depth to cut per layer. 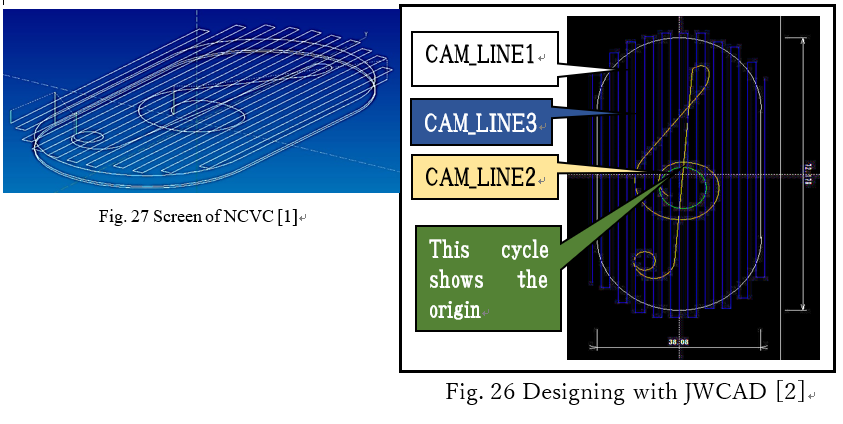 The data of the CNC
Spindle speed=6,400rpm
Feed speed of X- and Y-axis=50mm/min
Feed speed of Z-axis=30mm/min
Final depth of machining = see Table. 1
The diameter of end mill = 2mm